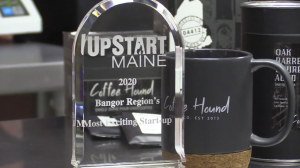 BREWER — Coffee Hound in Brewer, a veteran-founded and women-owned company, changed the way they knew business in 2019. At the time, Jennifer Litteral, the president of Coffee Hound Coffee Co., and her business partner, Chris Keegan, had multiple retail coffee shops.

“We wanted to diversify and open up our own roastery and start doing our own roasted coffee instead of buying from another location,” Litteral said.

Litteral said they got the ball rolling. The start-up process could’ve taken them two to three years, but Litteral said it took them nine months. From an industrial coffee roasting plant in Brewer, Litteral and Keegan now sell their coffee to nearly 100 grocery and retail stores from Fort Kent to Bethel.

Monday, they were recognized for their hard work and transformation throughout 2020 — a year where many people turned to making their own coffee.

“Everybody is looking for a cup of paradise,” Keegan said.

Coffee Hound was named “Bangor’s Most Exciting Start-up for 2020” by UpStart Maine.

“We’re very excited about being the inaugural, first one to receive this,” Keegan said.

Praise From
Our Customers

We have loved the products Coffee Hound has served in their shops for years and recently purchased their coffee online to make their nitro cold brew. We have been blown away by the taste and quality – identical to the shop, just without the lines. They are clearly focused on delivering the best product available. Well done!

Coffee Hound Coffee Company is a great local roastery. Their team does a fantastic job bringing in coffee beans from the best sources around the world right here to us and all across Maine. I highly recommend trying their coffee not only are you supporting local, but you are getting high-quality coffee!

My wife and I enjoy perked fresh coffee in the morning. This holiday she gave me a subscription to Coffee Hound. We are very pleased with the variety, flavor and the packaging is outstanding. Great job Coffee Hound Coffee Co.!

It has been over three years since I have had coffee. Today that changed thanks to the team at Coffee Hound and online orders. Fantastic nitro cold brew – black over ice, so smooth and delicious!

Outstanding service for my first online order, great coffee, great packaging and very fast shipping. My order arrived well before I expected. I will be a repeat customer for certain.

I am a coffee connoisseur and this is the smoothest, most flavorful, and non-acidic cup of coffee I have had the pleasure of enjoying. I’m in caffeinated heaven!

I have got to give high praise to Coffee Hound’s roasting skills for their subscription coffee club. Our coffee was 10 out of 10!

Best coffee around! If you haven’t tried it, I suggest you do. You won’t be disappointed!

Waking up with Coffee Hound’s Dark Roast makes the start of my day delish!

Best coffee around! If you haven't tried it I suggest you do. You won't be disappointed! Also a lot of choices to pick from and you can order online.

I hate Keurig coffee, but Coffee Hound's Keurig coffee pods are great! Fresh quality locally roasted coffee that hasn't been sitting around for months or longer makes a difference.

Great coffee roasted in small batches so it is always fresh - a micro roastery right here in Maine. I challenge everyone to get a bag and compare it to your "other" coffee, the quality is always top-notch.

Probably the best coffee I’ve ever had.

I was blessed to be in the isle at Hannaford's in Brewer, not that I was praying to find an INCREDIBLE coffee, but that is what happened. Thank you so much! I love the Bar Harbor medium coffee roast. Finally a wonderful coffee. Now what will I do with all the other bags of coffee I don't like in my cupboard.

Great coffee, with a great experience! I highly recommend!